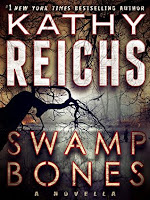 This novella is #16.5 in the Temperance Brennan series. Tempe has  traveled to Florida for a relaxing vacation, but of course those plans are interrupted soon after she arrives. Her friend (who she is staying with) is conducting research on bird species that are being threatened by an increased population of Burmese pythons in the Everglades. Tempe's vacation is cut short when she discovers some of the bones inside a python are human.

As with all of the Kathy Reichs books I have read, this one kept me solidly engaged. Since it was a novella, there isn't a lot of time to get into much other than the crime to be solved - though I was good with that aspect here because there is a lot of talk about snakes, and I have a phobia of snakes. It was comforting to know that Tempe feels the same way. I always say that I can't trust something that doesn't have legs (and can just slither anywhere). So I was somewhat amused by:

"The Everglades has a Burmese python problem."
"Pythons. As in alarmingly large serpents?"
I wouldn't call it a phobia, but I'm not overly fond of snakes. Slithery moves. Cold creepy eyes. You can't trust something that doesn't blink.

This is my 6th book read for the 12th Annual Canadian Reading Challenge.
Posted by Lisa at 9:24 PM