Guards! Guards!
by Terry Pratchett
My rating: 4 of 5 stars

This is the 8th Discworld book and the start of the City Watch sub-series. Having read a bunch of the later City Watch books it was fun to learn the 'origin stories' of some of my favorite characters. This book was also an excellent adventure with dragons and damsels to be rescued. It was also filled with Prachett's usual wry observations of the world. It even had a romance (I omitted the name to avoid spoiling things).

"And then it struck ___ that, in her own special category, she was quite beautiful; this was the category of all the women, in his entire life, who had ever thought he was worth smiling at. She couldn't do worse, but then, he couldn't do better. So maybe it balanced out. She wasn't getting any younger but then, who was? And she had style and money and common-sense and self-assurance and all the things that he didn't, and she had opened her heart, and if you let her she could engulf you; the woman was a city. And eventually, under seige, you did what Ankh-Morpork had always done--unbar the gates, let the conquerors in, and make them your own."

This book counts toward the Turtle Recall challenge.
Posted by Mary R. at 11:02 AM No comments: 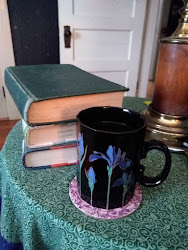 One of my reading plans for 2021 was to read 10 works of nonfiction and "some poetry." More would be fine, but I want to get to at least 10 works of nonfiction in a variety of genres (essays, history, biography). Past experience tells me that I am much more likely to do this if I have a place where I am keeping track. This post will be that place.  I am not counting the poetry books toward the nonfiction count, but plan to track both here. If I blog about a specific book once I finish it I will link to the post. If not (which is likely) I will link to the title on Goodreads.

Grey Mask
by Patricia Wentworth
My rating: 4 of 5 stars

This is the first book in the Miss Silver mystery series. When I compiled my Classics Club list I added this because I had not read any of this series. Since I made the list I realized that I owned Through the Wall, #19 in the series, and I have since read that and Ladies Bane (#22).
Miss Silver is a a bit like Miss Marple, she knits a great deal, but with the qualities of a very strict school teacher who always seems to know what everyone is up to whether they want her to or not. All of the books I have read so far have been set in England and had interesting, complex plots. The books have a definite golden-age tone to them (they were written between 1928 and 1961). I definitely enjoyed them and will keep reading this series. I was completely surprised by who the villain turned out to be in Grey Mask.
This title could count toward the Back to the Classics challenge as either a classic by a woman or a twentieth-century classic.
Posted by Mary R. at 8:16 PM No comments:

I went through all my shelves in the last months of 2020 and identified 43 books as owned-but-not-read. I gathered most of these into a single bookcase. (Some are elsewhere because they are part of a project or collection that has its own home). During 2021 I am going to endeavor to read as many of these as I can. Or to decide I am not going to read some of these books and move them on to a new home. Most of these books have been in my house for many years and I have no idea exactly where they came from. As I get though these additional titles may be shifted to this collection so 43 is definitely not a firm number.

January challenge for the UnRead Shelf project is to read a book with high expectations. I considered several books for this designation: the 3rd and final volume of Blanche Weisen Cook's Eleanor Roosevelt biography (I read and thoroughly enjoyed the first 1300+ pages), an Anne LaMott book (Bird by Bird is an all-time favorite); The Moonstone (arguably the first mystery novel); and Let the Great World Spin by Colum McCann (so much hype, so many awards!) I decided to go with Let the Great World Spin. Will see how that goes.

The December 2020 UnRead Shelf challenge was to read the shortest book on your shelf which for me was Life in the Garden by Penelope Lively at 199 pages. At this point it is still in progress, but I am moving through it, and for the most part enjoying it.

Equal Rites by Terry Pratchett
My rating: 4 of 5 stars

This is the third book in the Discworld series and the first in the Witches sub-series.
It begins with the arrival of a great wizard in a village where the birth of the eighth son of an eighth son is occurring. The wizard is dying and passes his power, and his staff, to the infant in the last moment of his life. There is one small hitch with his plan though: that eighth son was a daughter.
This novel was an entertaining adventure, as the daughter sets out to be a wizard despite the "fact" that girls can't be wizards. It was also very funny. Pratchett has a wonderful way of backing into familiar phrases.

“The lodgings were on the top floor next to the well-guarded premises of a respectable dealer in stolen property because, as Granny had heard, good fences make good neighbours.”

This book counts toward the Turtle Recall challenge.
Posted by Mary R. at 12:28 PM No comments:

A Century of Books

These are the things I am planning for my 2021 reading life:

To read 100 books (this is my usual GoodReads goal)

February - participate in the Wolf Hall readalong at Brona's books

October -- Three Musketeers Read along at One Catholic Life

Read 10 books from classics club list (incl. 6 for Back to the Classics Challenge)

Read some poetry books (my own goal)

Read 10 works of non-fiction (my own goal)

Read books from my shelves, inspired by The Unread Shelf project.

Start posting a Book Report (basically a "what I read, or tried to read, last month" summary) the first week of each month.

A Dance with Books is hosting a Discworld Challenge in 2021 and I am definitely in. How can I resist a challenge called Turtle Recall? At this point I have read 21 of the 41 Discworld books and am going to commit to the Klatch level which means reading 6-10 books. There are readalongs planned for February, April, June, August, October, and December (The Hogfather) which I will participate in if they end up being books I haven't read yet. (and can get hold of).

I always do better with challenges if I don't plan too specifically what I will read, but I am going to aim for finishing the 2 books I haven't read yet in the Tiffany Aching sub-series.

A Pitying of Doves

A Pitying of Doves
by Steve Burrows
My rating: 4 of 5 stars

This police procedural set in England features Dominic Jejeune a transplanted Canadian police inspector. The mystery here was was intricate and unravelled in a way that kept the readers attention. There was also quite a bit of information about the personal lives and internal conflicts of the various members of the Norfolk constabulary. I am counting this novel toward the Canadian Reading Challenge as the author lives in Ontario, several Canadians are characters, and there is a reference to the Tragically Hip in the story.