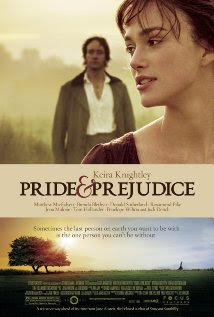 This novel contains one of the very best marriage proposals in all of literature and the depiction of it in this film was extremely well done. The sweeping vista with the mist rising over the landscape as the handsome gentleman crosses towards us in that wonderful great coat was a fabulous romantic image to lead into the scene. (I really think those coats should make a comeback.)
I thought the casting was quite good: Mr. and Mrs. Bennett were exactly right and Judi Dench was perfect as Lady Catherine. Both Mr. Darcy and Wickham were more handsome in my mind than they were in the film, though Darcy seemed to grow more attractive as the film went on.
Overall the film had something of the feel of A Room with a View, though I didn't think it was quite as successful in maintaining the grand romantic sweep of the narrative as the Merchant-Ivory production is. There were places where this film dragged a bit, but it was definitely worth watching.
Posted by Mary R. at 10:39 PM