The #6degrees meme is hosted at Books are my Favourite and Best. 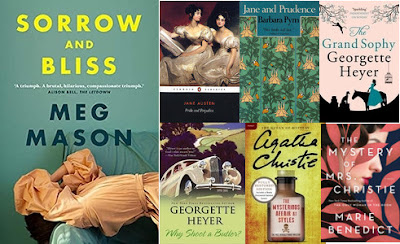 This month the chain begins with Sorrow and Bliss by Meg Mason which I haven't read.

"This novel is about a woman called Martha. She knows there is something wrong with her but she doesn't know what it is." (from the Goodreads blurb)

That description reminded me of Group: How One Therapist and a Circle of Strangers Saved My Life by Christie Tate, but I have used that book in a previous #6degrees post so I am going a different direction and starting with a book with a similarly structured title to the inspiration book: (1) Pride and Prejudice by Jane Austen which is (among other things) a comedy of manners set in Regency England. This leads me to (2) Jane and Prudence by Barbara Pym which focuses on the foibles of 20th century middle-class English life and the quest for a suitable mate. That is, Jane is on a quest for a suitable mate for Prudence and she finds that matchmaking has its pitfalls. Perhaps she should have taken matchmaking lessons from (3) The Grand Sophy by Georgette Heyer. That novel is one of Heyer's many (many!) Regency romances, but I first discovered her as a mystery writer when I read (4) Why Shoot a Butler? Written in the early 1930s this novel is set in an English country house and is a murder mystery centering on a family with a lot of secrets. This leads me directly to (5) The Mysterious Affair at Styles, Agatha Christie's debut novel which ticked all the same boxes a decade before Heyer's book was published. The final link in my chain is a novel that offers an explanation of Agatha's Christie's famous disappearance, (6) The Mystery of Mrs. Christie by Marie Benedict. It is a very good novel with a believable explanation of what went on, but personally I think the correct explanation for Christie's disappearance is the one offered in the Dr. Who episode "The Unicorn and the Wasp." Benedict's novel focuses on the marriage of the Christies so that seems like a good connection back to the original book which I think focuses on a struggling marriage as well.