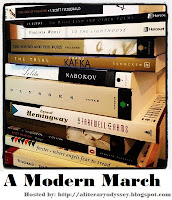 As part of Modern March I wanted to get a handle on what it means for a work to be "modern." The article at The Literature Network was quite helpful, though it has a lot of pop-ups.  The wikipedia article on Modernist Literature was also helpful.
Among the big names of the period are T.S. Elliot, James Joyce, E. M. Forster, F. Scott Fitzgerald, Henry James, Ernest Hemingway, William Faulkner, Langston Hughes, and Virginia Woolf.